Posted on August 16, 2016 by krasnajasvoboda

[Translator’s note: Although this article is politically irrelevant to the content of Left Russia, it can be used to understand Russian parliamentary ultra-nationalism and its main proponent apart from giving you a good laugh and a glimpse into Russian geopolitics albeit just a healthy tad exaggerated.] 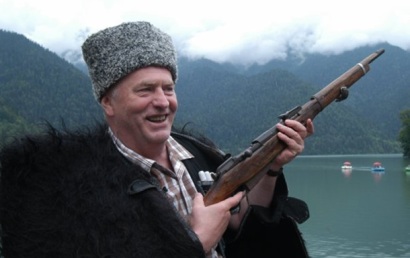 Today, the leader of the Liberal-Democratic Party of Russia (LDPR), Vladimir Jirinovsky gave a sensational interview on life.ru television channel.
On the events in Turkey:

Jirinovsky: We will benefit from a border with Turkey. We need an ally country next to us with a population of 70 million.We don’t need an enemy NATO-allied Turkey, it is obstructing us from using the Black Sea to its full potential.

Hostess: But Turkey will not exit from NATO.

Jirinovsky: I assure you, in 5-10 years we will create a new country in the south – Russia, Turkey, Iran, Syria and Iraq (by then it will have peace). It will be better than Russia, Ukraine and Belarus. Here, just have a look at these orthodox Slavic brothers, most of the traitors are among the Slavs and the orthodox. They are all traitors. Whereas these ones will be loyal, because we will ensure their security. It will be a great alliance!
On the elections in the USA:

Trump, Hillary; we don’t give a damn about all of America. We live separately, and they are of absolutely no interest to us. The one, who shall be elected President, will do exactly the same things that Barack Obama is doing. And Barack Obama did what Bush did. And Bush did what Clinton did. It does not matter, just like earlier our General Secretaries. For that reason, you can, of course, think [sic].

We should be in a neutral position, otherwise we bother him. Over there, there are very strong anti-Russian and anti-Soviet sentiments. For each one of our [sic] nods, for any feeling of sympathy to anyone, they will tear to shreds. 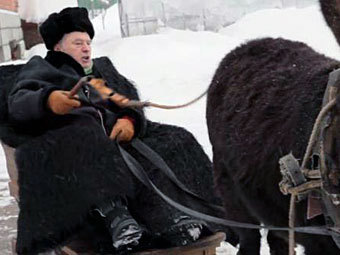 On the events in Armenia:

Hostess: Vladimir Vol’fovich, America is far away, Armenia is close. So describe the events in Armenia.

Maybe people themselves will be in need of doping. What about the people in Armenia? There will occasionally be performances. A small country, mountainous, sandwiched between mountains, between Azerbaijan and Turkey, no perspectives, no economy. Already only one million Armenians remain there. Whereas in the world there are six million. They all scattered. Lebanon, Iran, Russia, France, USA; they stroll all over the world. There’s no place to live there, mountains. Naturally, different factions will do nasty things to each other there.

Jirinovsy: Well for God’s sake! If they stop giving a damn about us, we will take the base. They will be rolling in our feet, so that we return the base. This base is their salvation, otherwise they will be erased from both sides by the Turks and the Azerbaijanis. That’s why you shouldn’t worry about Armenia. They will never abandon us because then their end will come, that’s all, a decisive end.

Azerbaijan will immediately seize Nagorno-Karabakh; Turks will help. Whereas already 300 years ago Armenia was saved by Catherine II.

Originally published on 02.08.2016 on Krasnaya Armeniya, a page hosted by vk.com social media.