Yakutsk: A Tricolour Cake Meant for Orphans Was Eaten by Officials

Posted on August 24, 2016 by krasnajasvoboda 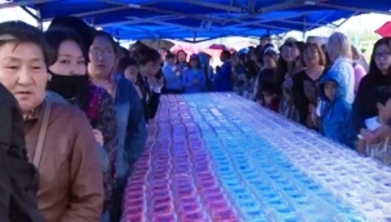 Yakutsk government officials ate a tricolour-themed (a.k.a. Russian flag) cake, which was baked expressly for the Federal Flag Day celebration. Children from the local orphanage, seniors and all interested were invited to the celebration, yet only the officials got to have the cake, as they came before everyone else. This was reported by Bloknot.Yakutsk.

The planned festivities started at 12 pm local time with a rally at Lenin Square. At 12.40 a bicycle race with the participation of members of the regional government was expected to take place. The route ended at Komsomol Square, where, at 1.10 pm, all participants in the festivities would gather at a table set up, with a celebratory cake in the colours of the Russian flag. 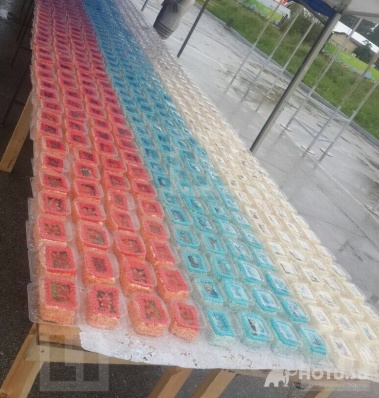 However, the government officials managed to finish the bicycle race faster than expected and arrived on the cake’s supposed location before the rest and ate the entire delicacy. The publication notes that initially the plan was to give out small cakes in the shape of the Russian tricoloured flag to orphans and children from low-income families.

“Today we were brought to Komsomol Square and told that we would be treated to cake due to the holiday. Even though we arrived 20 minutes before the beginning of the event, the cakes had already finished”, explained the children from the Bereginya orphanage to the publication.

The local seniors, who had been also invited to the festivities and were promised cake, lashed out with critique at the event’s organisers.

“Why was it necessary to indicate the time at which the cake would be served? We were told that changes to the program had been made, but who is then guilty? That means that the organisation is bad”, told one of the participants at the event to the publication.

The total mass of the cake was 280 kg. It consisted of 1400 pastries weighing together 200 kg. Each pastry was decorated with Yakutia’s landmarks as well as nature, flowers and Yakutian horses.