Posted on August 14, 2016 by krasnajasvoboda 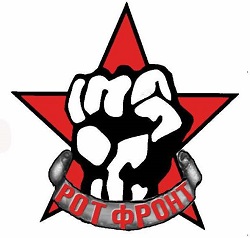 The idea that led to the creation of a Front of anti-imperialist class forces is, of course, not new. The experiences behind the struggles of antifascist people’s Fronts of the 20th century, with Thälmann’s Rot Front in the foreground, are well-known. On the whole, this idea comes from a conclusive deductive call out of the Manifesto of the Communist Party “Workers of the world, unite!” In Russia, during all the years of the war against capitalism, starting at the times of Gorbachev, the question of uniting the left forces always stood on the agenda and was being decided in a variety of ways: Coordination Committees were active, party leaders held meetings, headquarters and diverse alliances were being created. In some cases cooperation functioned, in other cases it did not. Naturally, particularly deep differences were observed on steep political turns. For example, after the fusillade of the Supreme Council of the Russian Federation in October 1993, most left organisations (RKRP, RPK, RKP-KPSS, VKP (b), SK and others) positioned themselves for the boycott of the elections upon blood. However, due to the actions of the leadership of KPRF (Communist Party of the Russian Federation) and some other patriotic organisations, the boycott front was breached. They assisted Yeltsin to get the voter turnout to just above 50%, to drag the antipopular Constitution through the so-called referendum. This allowed Yeltsin to wash off the traces of the crime and to declare before the whole world that we have democracy and that everyone participates in the elections ranging from communists to liberals.

Since then, the question of the unity of left-wing forces has become more urgent, since right-wing opportunists, moderate nationalists and further petty bourgeois forces are clustering around KPRF. None of them carry the task of organising the working class for struggle. Yet this task is becoming all the more pressing. The situation in the country and in the world, particularly with the onset of the world economic crisis accompanied by intensified reaction requires the creation of an organized revolutionary working class – a class for itself. Such an organisation can only appear as a result of independent political struggle of the working class. For this reason, the idea of involving the working class in political struggle, the idea of uniting communist ideology with the worker’s movement has become as relevant as never before.

In the years 2003-2007 the authorities have conducted a legislative reform (“Regarding parties”, “Regarding elections”), by means of which the authorities received the possibility to fully regulate the composition of political forces that are eligible to participate in official political life. After the establishment of a draconian membership requirement (at least 50 000 members), which parties were obliged to prove within one year, with the help of the Supreme Court, all inconvenient parties were denied registration. The number of registered parties narrowed down to 7. In 2007, RKRP (Russian Communist Worker’s Party) was denied registration. It was clear that to counter this impudent swaggering policy a necessary step would be the consolidation of genuinely popular oppositional forces, the achievement of unity in struggle in all spheres: economic unity in the enterprises, protest unity in regions and cities, political unity (including through participation in elections).

Due to the fact that the membership quota of an organisation (no less than 50 000), for a chance at participating in elections, remains a requirement, the idea was put forward to bring together all active organisations that have a stance on class positions, that were in the process of being dislodged from big politics. Thus the idea of creating the Russian United Labour Front as a block of class forces was born.

More than a year was spent on the harmonization of positions, the determination of participants’ composition and on the rules of cooperation (the regulations). In February 2010, the First Congress was held. It took practically more than two years to register, the Ministry of Justice denied registration 6 times, it went to court, which, naturally, took the side of the authorities. Once again four congresses were held. The authorities were not the only ones to express their dissatisfaction. The Leninist-opportunists represented by Gennadiy Zyuganov also saw the Front, which was in the process of being created, as their rivals, which led them to declare that it is a “Kremlin project”. Nevertheless, on the seventh attempt in November 2012, the Front was allowed to register as a political party.

During the time spent building the Front, many different petty bourgeois socialist organisations and parties of a barely left orientation, which, yet, were guided by the idea of uniting all opposition forces (going as far as planning a visit to the president) tried to take part in the process. After, they all jumped off the moving train. Conclusively, this lead to a genuine class-conscious working nucleus to stand out from within the Front along with RKRP, RKSM(b), other left organisations and, most importantly, activists of class-oriented labour unions.

In the recent times after 2012 and Putin’s elections, mockery of the electoral law continued. During the times of Medvedev, the visibility of the process of democratization was presented clearly, the membership quota of a party was lowered to 500 members and all parties were permitted to participate in the elections without the signature collection requirement. Then, the authorities started to make corrections to the electoral law, which made these opportunities not achievable (once again the signature collection requirements were introduced and tightened – 200 000 for participation in parliamentary elections, diverse filters and etc.). At the same time, as of 2003, parliamentarians have not forgotten to increase the per-vote subsidy of their parties by 100! The goal of the said measures remained the same: the parties admitted to occupy seats in the parliament by the authorities wanted to safeguard their position and to suppress the possibility of any other rival’s potential participation in elections.

Some of our fellow opposition parties (KR, OKP and others) started registering their organisations as political parties. We wish them lots of success, although we believe that it is at the very least a tactical mistake. The problem is that parties with their own program, regulations and methods of struggle do not really require registration (RKRP is not registered nowadays), whereas to participate in elections, including overcoming the constantly renewed barriers, the forces must be explicitly united. Thus, the relevance of the common Front’s tactics will only grow, and we think that sooner or later our closest allies will understand that, too.

Yet the Front’s main task, as noted above, is the involvement of the broadest masses of working people into the political struggle.

Originally published on 07.05.2014 by the political party ROT FRONT

1 Response to History of ROT FRONT