Posted on August 15, 2016 by krasnajasvoboda 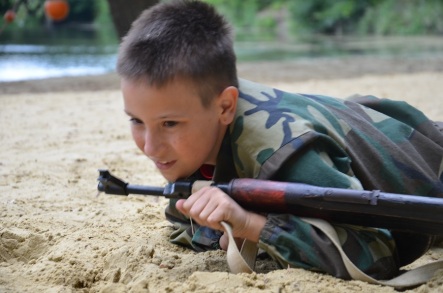 The demonstrations that were held by the Ministry of Emergency Situations (MChS) of LNR in the Lesnyye prostory camp have become a very bright and memorable event. Children were not only shown firefighter equipment, but were even given the chance to feel themselves out in the role of lifesavers. They were dressed in firefighter uniforms and were given the possibility to try themselves out operating a fire truck and fire extinguishers in real life. On the next day, camp pupils gathered at the lake in order to watch a scuba diver at work. Of course, all of this generates interest. Whereas the activity conducted by MchS engineers, which included the demonstration of different types of landmines, including booby-traps and explosives, carried an enormously useful role. It is no secret that the military action that swept through the area has left behind a lot of deadly ‘surprises’, which are first and foremost a danger to children, since children are the ones, who are attracted to everything unknown. 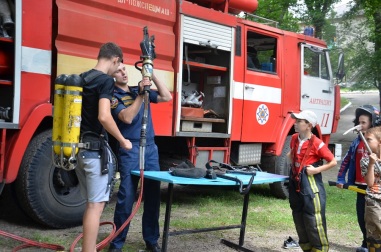 But demonstrations are only the tip of the iceberg, even if the brightest and most noticeable. The most important is, however, not the rousing coverage, but the work that takes place in children’s souls. The civil war has become possible only because the enemies were able to fill the heads of the residents of South-Western Rus’ with foreign values, to raise them to become consumers, indifferent to the Truth and the Motherland, to make them believe lies.

Today we are also struggling, by force of arms included, with the consequences of the degradation of our youth. Crimea and Donbass turned out to be stronger than the rest of the territory of former Ukraine. But even today, here, the children become the first victims of the media war. If all tastes and habits are formed by the stupefying mass culture, the child absorbs the false values of the consumer society, if songs are playing at night clubs, which reduce the holy notions of family, love and loyalty to the satisfaction of bestial instincts and casual sex, will such children become worthy citizens of the heroic young republic, of the Russian world? We, educators, see much work ahead of us.

We concluded the second military-patriotic shift in the Lesnyye prostory camp with a tactical game, in the process of which our fighters overcame the assault line (rus: огненно–штурмовая полоса). The teams passed all of its stages, being: a history of the Fatherland and the Donbass people’s struggle against the aggression of 2014-2016 quiz, the obligatory assembling and disassembling of AKs and PMs. Afterward comes the most active section. At this stage, we were greatly helped by the staff of the juvenile affairs department of the MVD LNR. They brought along firearms, ammunition and pyrotechnics, ensuring that the kids would pass the obstacles to the sound of gunfire and the explosions of smoke grenades and flares. The tasks were to hit the target with assault rifle fire, throw two grenades into an agreed enemy trench, then to crawl under the obstacles, to evade an enemy attack with a jerk of the body and to show hand-to-hand fighting skills. After that, the transportation of an injured fighter, who is given first aid by boys and girls from the medical division. The republican centre Sport for all of the Ministry of Family Affairs, Youth, Sport and Tourism of LNR helped organising the relay race. 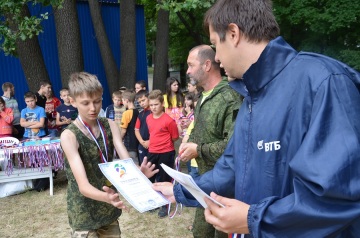